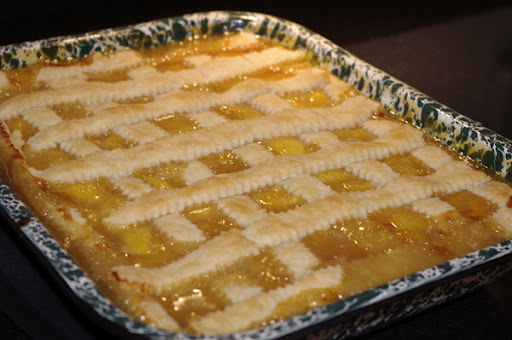 The peaches have just started to ripen in Oregon and thought of my husband favorite peach dessert.  The two layers of crust gives him twice of his favorite part! 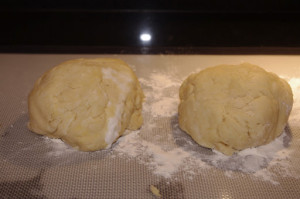 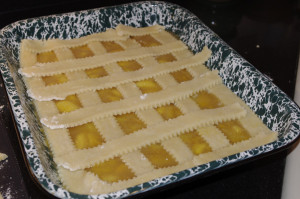 ½ tsp. cinnamon
1 tsp. vanilla extract
1/3 cup butter
In large bowl combine flour and salt, with pastry blender cut in shortening until it resembles coarse crumbs. In small bowl mix vinegar, water and egg, add to flour mix and combine until dough comes together, do not over mix. Set aside.
In large pot combine peaches, sugar, flour and cinnamon, let set for about 10 minutes until syrup forms. Bring to a boil then reduce heat to a low and cook for 10 minutes. Remove from heat and add vanilla and butter stir until the butter is melted.
Roll out half the pie dough to about 1/8” thickness on lightly floured surface and cut into 8” squares. Spoon half of the peaches into a lightly butter 8×8 pan; top with squares. Bake at 475 degree oven for 12 minutes or until lightly brown. Spoon remaining peaches over pie squares. Roll remaining pie crust to 1/8” thickness and cut into 1” strips; arrange on top of peaches in a lattice pattern. Bake an additional 15 to 18 minutes or until browned.

Pears are still in season Fresh From Oregon.  We take a few trips every fall over the mountain to Hood River, Oregon where you can buy pears fresh from the orchards.  There are many great places to shop but my favorite place is Kiyokawa Family Orchard & Fruit Stand.  If you do not live close […]

It is only 16 days until Christmas and holiday baking and candy making has started in my house here in Oregon. I made my list and checked it twice for all my family’s favorite recipes.  Now that I live in the Pacific Northwest and have picked and enjoyed some of its local flavors I have […]

If you ask what’s Fresh From Oregon this week it seems like anytime you can get Kale.  The Portland Farmers Winter Market is over flowing with all types of greens this time of year and the Kale is looking great.  There are several types of Kale as you look around the market, Italian Kale, Red […]

It has been a very rainy spring this year in Oregon, so with a peek of blue skies today I headed to the Beaverton Winter Market.  I live in the foothills of Mt Hood and this is a little over an hour drive for me but I just had to see what was Fresh from […]