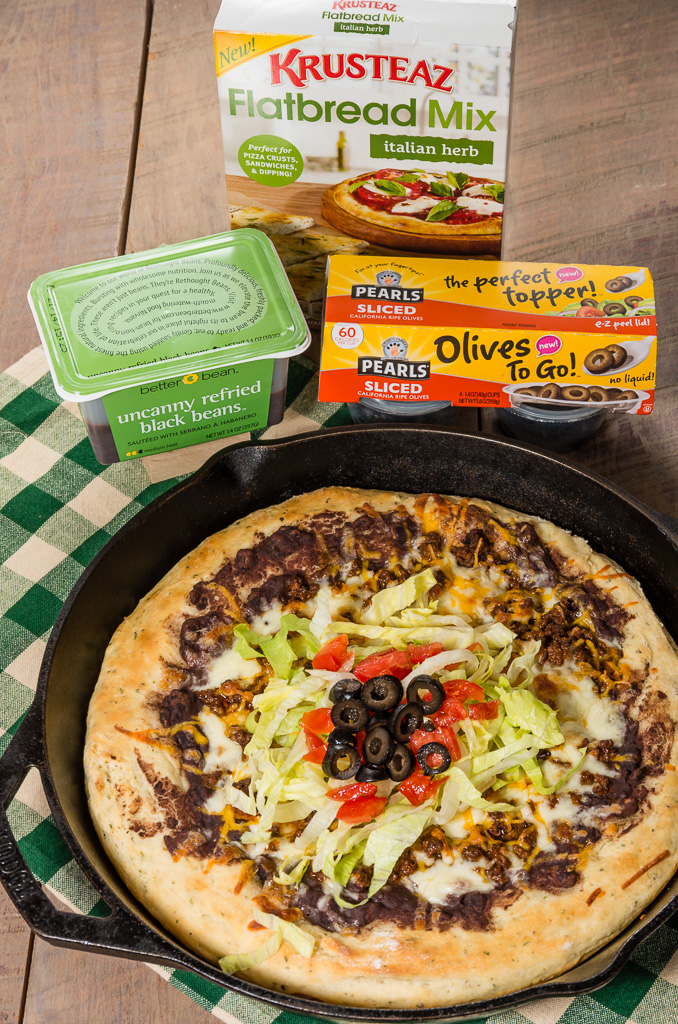 Here is another recipe for the great products I received at the 2014 IFBC in Seattle this year.  The Krusteaz Flatbread mix makes an awesome dough for pizza.  The flavors of the Italian Herb in the mix adds that extra layer of flavor to this pizza.   Let’s not forget the sauce of this pizza is BEANS, not just any beans but “Better Bean” made local here in Oregon.  They have six flavors and I thought the best one for this deep dish pizza was their Uncanny Refried Black Beans.  To finish off the Taco pizza I added a layer of lettuce and diced tomatoes saving the top of the pizza for the Pearls “Olive to Go” Sliced Black Olives.  These ready to go single serving containers are great to have on hand as a topping for pizza but also great for a salad, garnish or just eating right out of the container.

Preheat oven to 475 degrees.  Lightly grease two 12″ cast iron skillets*.
In medium size bowl stir together the Krusteaz flatbread mix and yeast packet enclosed.  Add warm water and oil, stirring until dough forms a ball.  Cover bowl with plastic wrap and let rest for 10 minutes.
Divide the dough in half and in prepared cast iron skillets place dough ball and with your fingers push and shape to fit the skillet.  I like a thick crust so I pushed some extra dough along the rim of the skillet.  Spread 1/2 of the “Better Bean” Uncanny Refried Black Beans over each flatbread dough.  Divide in half and sprinkle the prepared taco meat evenly over the beans and then sprinkle both cheeses over the pizzas leaving about 1/2″ of the dough bare for a nice crust.  Place in a the 475 degree oven for 12-15 minutes or until crust is golden brown and cheese is melted and light brown.
Remove from oven and evenly layer the lettuce, tomatoes and Pearls Olive to Go Sliced Black Olives.  Remove from pan, cut and serve hot.  Sour cream adds a great addition to this pizza!
* If you do not have cast iron skillets you can shape and place the flatbread dough on any baking pan or pizza pan. 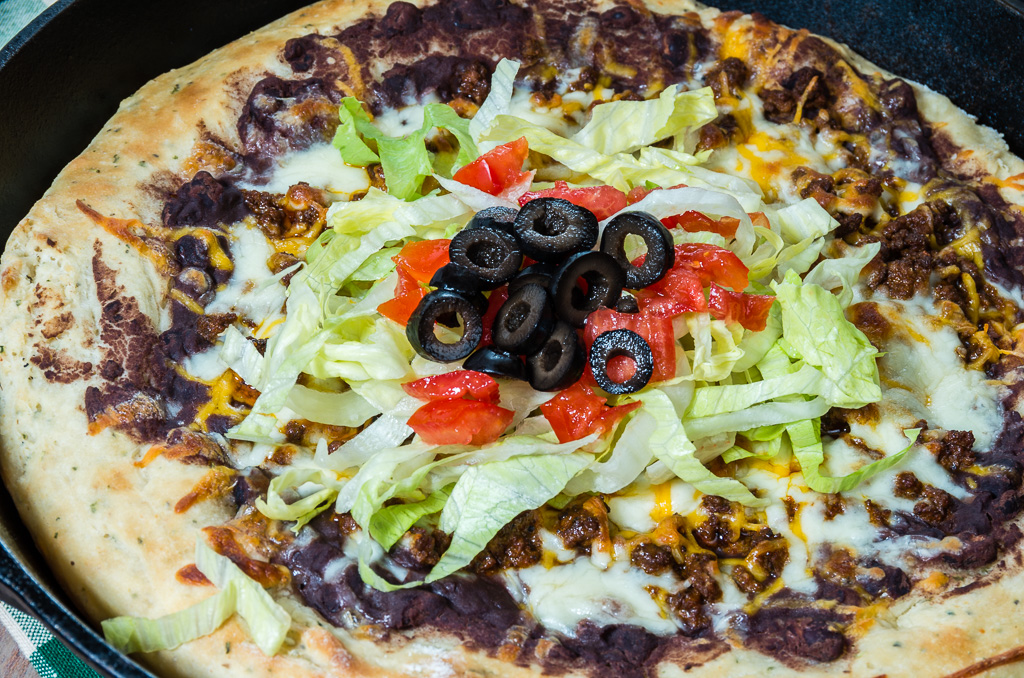 This is the best pie crust and the only one I make. I have been using this recipe for over 30 years for baking fruit pies, cobblers, mini hand pies, homemade pop tarts, savory chicken pot pies and so much more.  This pie crust has won many blue ribbons and best of shows at my […]

Fresh strawberries are over flowing everywhere here in Oregon.  As I was walking through the farmers market this weekend the question I kept hearing as people were buying strawberries was are they “Hoods”.  The strawberry variety everyone looks for here in Oregon are “Hood” Strawberries, so what are Hood Strawberries? They emerged from Oregon’s Hood […]

It has been just over a week since coming home from Seattle and my first IFBC (International Food Bloggers Convention).  Signing up over 6 months ago I was so excited to meet other food bloggers and hear what they do to have a successful blog.  As the day drew near to drive the 4 hours […]

Among the spring greens at the farmers market was some fresh picked lettuce.  I got the most beautiful bag that had 2 bunches of romaine lettuce from one of the local farmers.  Today was a day I wanted to put together an easy and quick meal and this Fresh From Oregon lettuce was on the […]